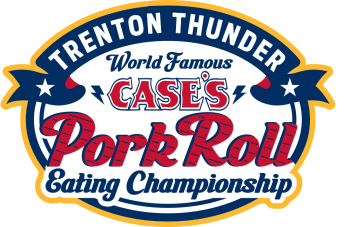 No sleep ’til Trenton! New Jersey—like you don’t know—is the spiritual home of recreational and competitive pork roll consumption and the mighty Case’s Pork Roll Sandwich is the finest exponent of the cuisine in the Garden State. To visit Trenton, NJ, and not enjoy a Case’s Pork Roll Sandwich would be like visiting Paris and not enjoying a croissant or going to St. Louis and not eating fried raviolis for some reason.

And thus it is that we return to Trenton Thunder Ballpark for the 2022 installment of the River Fest Featuring The Trenton Thunder World Famous Case's Pork Roll Eating Championship. Major League Eaters from near and far are warmly encouraged to sign up for the chance to compete.

Do you have what it takes to take the gold and the big money? Will you break Chestnut’s world record? Maybe? Probably not? No? Do you simply want to watch the best in the world do what they do so well? This is River Fest Featuring The Trenton Thunder World Famous Case's Pork Roll Eating Championship! At the table or in the crowd—don't you ever miss it!

This contest will take place at 3:30pm ET on Saturday, September 24th, 2022, at the home of the Trenton Thunder, Trenton Thunder Ballpark, 1 Thunder Rd, Trenton, NJ 08611

ABOUT THE TRENTON THUNDER! The Trenton Thunder have drawn over 10 million fans over 28 years and have won the three major awards that Minor League Baseball teams can win; the Johnson Trophy for the "Nation's Best Franchise" (2005), the Larry MacPhail Trophy for Outstanding Club Promotion (2003) and the Bob Frietas Award for Long-Term Success (1998, given by Baseball America). The team has given back over $7.5 million worth of goods, services, and monetary donations through Trenton Thunder Charities, under the Grand Slam We Care Foundation umbrella. The Thunder can be found online at trentonthunder.com, facebook.com/trentonthunder, twitter.com/trentonthunder, and on youtube.com/AATrentonThunder.

For results to all Major League Eating Contests, follow @eatingcontest.