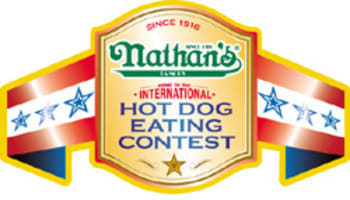 The 2021 Nathan’s Famous Fourth of July International Hot Dog-Eating Contest will take place before a live audience in Coney Island on Sunday, July 4, 2021, starting at 11 am. Last year, due to the pandemic, the contest was held for media only in a private location.

The annual contest, an American holiday tradition, will be held at Maimonides Park (formerly MCU Park), home of the Brooklyn Cyclones and only steps from the Nathan’s Famous flagship restaurant on Surf and Stillwell avenues.

The free, ticketed event will follow all federal, state and city health and safety regulations. Tickets to this year’s contest will be distributed on a first-come, first-served basis. For ticket reservations: https://docs.google.com/forms/d/e/1FAIpQLSfPHhCushAtw2OjFZMNtgAeSmd6Q7qdkvsCznq3WPiIkyBgFg/viewform?embedded=true, or email Nathanshotdogeatingcontest2021@nathansfamous.com.

Doors will open at 10 am and the event will begin at 10:45 am with the introduction of the female eaters. The women’s competition begins at 11:00 am, while the men’s competition will start at 12:30 pm.

In the women's competition last year, Miki Sudo of Tampa, FL, broke the women’s world record and took first place, marking her seventh consecutive win by eating 48.5 hot dogs and buns. Larell Marie Mele came in second, with 18 hot dogs and buns in 10 minutes. Sudo will not be competing this year. A total of 18 men and 10 women are expected to compete on July 4.

On a typical year, as many as 30,000 fans make the pilgrimage to Surf and Stillwell avenues to watch the event in person. The ESPN telecast of the contest routinely draws an audience of millions of viewers. An annual part of the event is the Nathan’s Famous donation of 100,000 Nathan’s Famous hot dogs to the Food Bank for New York City.

“It is encouraging to hold this event live for fans, who last year were unable to celebrate July 4 as they traditionally do,” James Walker, Senior Vice President, Restaurants, Nathan’s Famous. “Next year, we hope to return to the corner of Surf and Stillwell avenues, where we have held this event for decade after decade.”

“The Nathan’s Famous contest is the crown jewel of the Fourth of July and stands as a beacon of freedom for all those who believe in American exceptionalism,” said George Shea of Major League Eating. “Joey Chestnut is a national treasure. The rock on which he stands is not a rock—it is the United States of America.”

According to Major League Eating archives, the Nathan’s Famous Fourth of July International Hot Dog Eating Championship has occurred each July 4th in Coney Island, NY, since 1916, the year Nathan Handwerker opened the legendary restaurant. MLE, the governing body of all stomach-centric sport, sanctions the Nathan’s Famous Hot Dog Eating Circuit and ensures the contests are judged professionally and that safety standards are in place at each event.