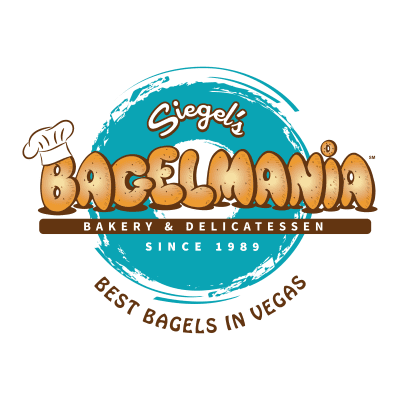 Ladies and gentlemen! Major League Eating is proud to announce the kickoff of the 2023 season & a new addition to our slate of sanctioned eating contests — the Siegel Bagelmania's World Bagel Eating Championship!

Bringing the east coast to the west coast, Siegel's Bagelmania has been serving up New York-style boiled bagels for over 3 decades. They have cemented themselves as a Las Vegas institution and national authority on all things bagel. Who better to sponsor Major League Eating’s debut in this delicious discipline? NO ONE!

On National Bagel Day 2023, history will be made! A world record will be set for the most bagels with cream cheese consumed during the eight minutes of competition. Who will sit on the throne made of bagels and shmears? Will it be YOU? At the table or in the crowd-don’t you ever miss it!

Siegel’s Bagelmania is a modern-day Jewish delicatessen and bakery in Las Vegas that has been serving up the finest authentic recipes for more than 33 years. It’s been a local hidden gem behind the glitz and glamour of The Strip, where the “who’s who” of Vegas gather for our from-scratch recipes and house-made breads, New York-style boiled bagels and shmears, pastries, loaded sandwiches including signature “Bagelwiches” and more. Bagelmania is a timeless eatery that caters to everyone and strives to be the most craveable delicatessen and bakery in Sin City. Don’t miss the sprawling to-go deli counter or platters for special occasions. The flagship location is next to the Las Vegas Convention Center, with a sister spot at Harry Reid International Airport inside the A Gates in Terminal 1.

For news and results to all Major League Eating Contests, follow @eatingcontest