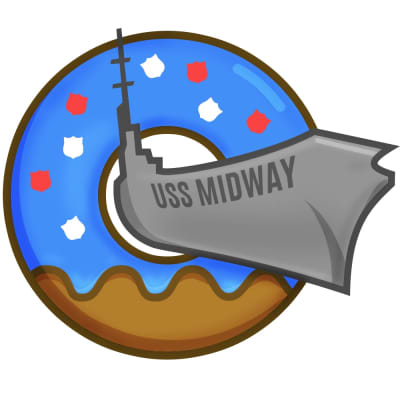 We come to you with great—and delicious—news: The Salvation Army National Donut Day World Donut Eating Championship returns to Major League Eating’s slate of sanctioned eating contests for 2019. Major League Eaters are encouraged to sign up for the chance to participate in this celebration of the good work by the Salvation Army by eating donuts aboard the USS Midway. Nothing could be more fitting for this history-making event.

The donut as we know it was a World War One battlefield improvisation. They are the brainchild of Salvation Army "Lassies," women embedded with US troops on the Western Front who provided crucial support to the war effort. Helmets became deep fryers. Spent artillery shells became dough cutters. Empty wine bottles became rolling pins. And the donut as we know and eat it was born. When US soldiers returned home from Europe, they brought with them their love of the donut, and donut shops and bakeries across the land responded to meet demand. Today, food scholars all agree—no Salvation Army, no US donut culture.

Today, the Salvation Army’s tradition of doing the most good is as strong as ever. All throughout Southern California, and beyond, The Salvation Army serves veterans in need with a full spectrum of support: employment services, emergency shelters, financial assistance, and more. Major League Eating is honored to join The Salvation Army and their partners BakeMark to raise money and awareness for programs that serve veterans on a daily basis.

Do you want to celebrate good deeds and history? Do you want to eat umpteen BakeMark donuts aboard the USS Midway? Do you have your eyes on Joey Chestnut’s 2017 world record 55 donuts in eight minutes? Then sign up today! This is The Salvation Army National Donut Day World Donut Eating Championship! At the table or in the crowd—don’t you ever miss it!

CLICK HERE for more information of The Salvation Army of California South Division!

Become a fan of The Salvation Army California of South Division Facebook Page!

Check out The Salvation Army of Southern California on YouTube YouTube.com/user/SalArmySoCal.

For results for all Major League Eating Contests, follow @eatingcontest.

**All applicants must be 18 years of age or older and fully acknowledge and understand the inherent dangers and risks associated with participating in an eating contest. The applicant further acknowledges and understands that the MLE/IFOCE coordinates with event sponsor(s) to select and approve eligible participants, and that the MLE/IFOCE shall decide, at its sole discretion, whether an applicant is eligible to participate in any eating event, and/or related activities. The MLE/IFOCE may revoke an applicant's eligibility to participate in the eating contest, or related activities, at any time, for any reason, at its sole discretion. The MLE/IFOCE and the event sponsors reserve the right, at any time, to change any and all details concerning the event, including, e.g., time, duration, location and prize structure.